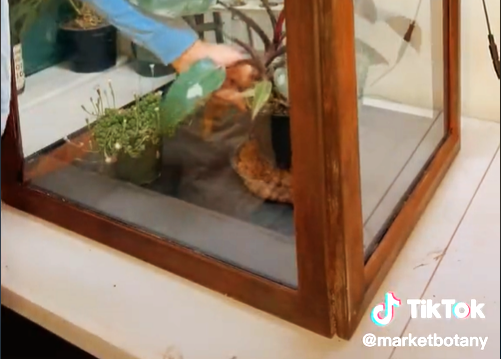 Have you ever heard of the “thrift store gods”? TikToker Cameron Curry a. And it seems they looked down on him with kindness recently, when he went in search of second-hand picture frames to turn into a bespoke table greenhouse.

And, perhaps inevitably, the TikTok Video Curry then uploaded instructions on how to do a similar project yourself went viral.

The video, which has garnered over 700,000 views, was uploaded to Curry’s TikTok account, @Marketbotany. It starts with Curry at one of his local thrift stores, piling frames into a cart.

Curry then explains that the first step is to remove all the mat, glass, all mounting hardware and stickers from the frames.

“We want raw wood,” he says in the video. “The frames were quite damaged and different colors, so I’m giving them a sand to remove the finish.”

Curry proceeds to fasten the frames together in a box shape, using corner brackets. Then he fills in all the seams with wood-bonding epoxy, which he sands down after it dries.

“Now trust the process here,” he says after pulling out the paints. “I layer an undercoat, finishing with the dark tones, and a clear coat to bring this dark wood to life.”

For those in the dark, not all plants need to be grown in a greenhouse. However, a glass house for some of your plants can be incredibly useful for a number of reasons, according to the Royal Horticultural Society.

More exotic plants, such as okra or melon, often need a little extra heat. And during the summer months, tender crops such as cucumber, eggplant, peppers or tomatoes will thrive in a greenhouse.

You may want to use a greenhouse to start your vegetables before planting them outside. You can also use them to get an earlier harvest of certain crops, like green beans.

After Curry fixes a doorknob, he puts the glass back in place using marine-grade silicone and a little more epoxy in each corner. He notes that it’s “a long process” to make sure the glass stays in place: but the results are spectacular.

Another user, @maibreagh, wrote that she plans to make one herself. “This is so cool!” She wrote. “Much more character than store bought.”

TikToker @$_$ commented that he was a thrift store employee and expressed his joy that Curry’s video could encourage more people to buy used photo frames.

“Glad this video is popular,” they wrote, “because…we’re getting more footage than we know what to do with.”

In response to a question from another user about the budget for the project, Curry replied “$12 on frames, $10 on hardware, and I already had the silicone and paint, but less than $30 total .”

Other users commented “looks like I have even more excuse to grab pictures when I’m saving up lol. That’s smart” and “I can steal this idea”.

Curry, who tagged the video with hashtags like #diy, #thrifted and #upcycle, ended his transmission by saying “This might not be the coolest new greenhouse cabinet anyone has, but I like to think it’s pretty cool to use the things I have to do to make it something one of a kind.”

In response to a user asking if he could make one a little bigger to accommodate taller plants, Curry wrote “Only if the thrift gods allow it.”