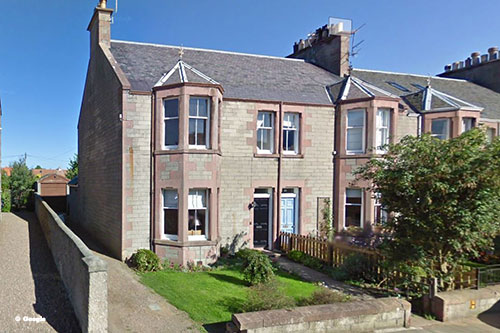 The house on the Hopetoun terrace of Gullane.

An owner’s bid to replace his front windows has been rejected – despite being allowed to replace rear windows seven years ago.

The owner of the house on Gullane’s Hopetoun Terrace had applied for planning permission to replace seven front windows and an entrance door using PVC frames.

However, East Lothian Council planners decided the change would set a precedent which they believed could impact the character of the entire street.

And the Architectural Heritage Society of Scotland opposed the use of plastic frames.

In a report on the development application, the company said the window frames “would not preserve or enhance the special architectural or historic character of this part of the Gullane Conservation Area”.

The report revealed that the owner had obtained approval to replace the rear windows of the house in 2015 using PVC, but that the house occupied a prominent position in the conservation area.

At the time, rear windows were allowed because they were not easily visible from the road.

However, officers said the front windows were visible from the terrace and they described the proposals to mimic wooden and sash frames with PVC ‘plants’ as ‘artificial and unauthentic’.

And they said the plan to replace the wooden front door with the use of composite glass-reinforced plastic (GP) would also detract from the character of the building.

Denying planning permission, they said: ‘If approved, the proposed replacement front windows and front door would set an undesirable precedent for the installation of PVC framed windows and similarly designed composite doors in the facades of other houses in this part of the streetscape.

“Over time, such a change would be collectively incompatible with the character and appearance of this part of the Gullane Conservation Area.”

Midlothian View support from just £1. It just takes a minute. Thanks.